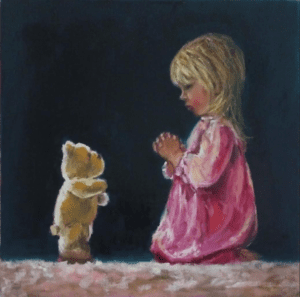 This painting  “Divine Light” will be used to raise funds for Pieta House.

Irish Art Divine Light.There is a gentleman in Co. Wexford who has dedicated his time to putting up Teddybears in public places. Along with the Teddybears are the phone numbers of the Samaritans and Pieta House.

Included also is a message that your family and friends love you. His name is Mick Ryan, and  a personal loss led him onto this path. The amount of lives he saves , in my opinion cannot be quantified. While he gets feedback from people who have had a change of mind, I can only assume that there are plenty saved who are unable to reach out.

As an artist who paints teddybears when I saw his appeal on Facebook for more teddybears I decided to send him on a few of mine.

Turns out I don’t actually want to part with any of  them. While I don’t have a huge amount I do use them all in my work.

Instead I thought what about sending him this painting to raise funds for Pieta House?

The idea for this painting was simply to capture the innocence of childhood using chiaroscuro, an old masters technique. Teddybears are very forgiving to paint I just kept it simple and threw some warm light around him to emphasize  “Darkness into Light”

What about the little girl? I just wanted to paint a small child praying. I wanted it to be very simple but visually striking and appealing.

Details of the raffle are to follow. Wishing Mick the best of luck going forward with his work. It’s a brilliant idea, which I believe will gather momentum and become more widespread.

Maureen O’Mahony Art – It’s All About The Visual